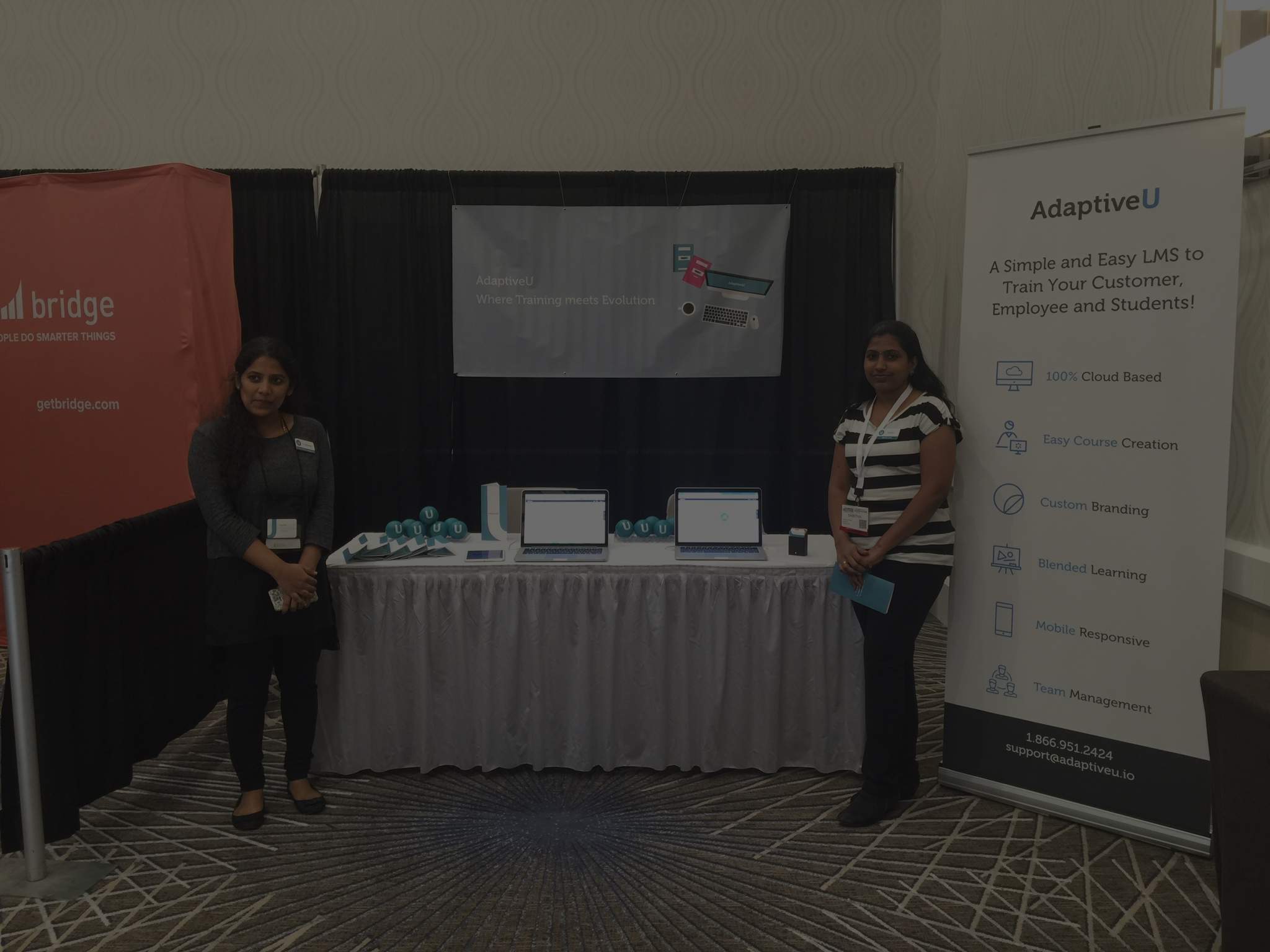 As a remote company, we depend on web-based training to bring our new employees on board and to keep our veteran team members up to date on policies and tools. Trainers like Lucy and Ciara conduct classes using Google Hangouts and our own AdaptiveU learning management system (LMS), for which Saranya is the Product Owner.

Learning Solutions Conference and Expo is an annual convention for the online learning industry. Attendees from around the world come to share information about technologies and techniques for training and workforce development.

Saranya, fellow developer Sabitha, Lucy, and Ciara went to Learning Solutions 2016 in Orlando, Florida to give a presentation on AdaptiveU and join in the expo. Here’s what happened: 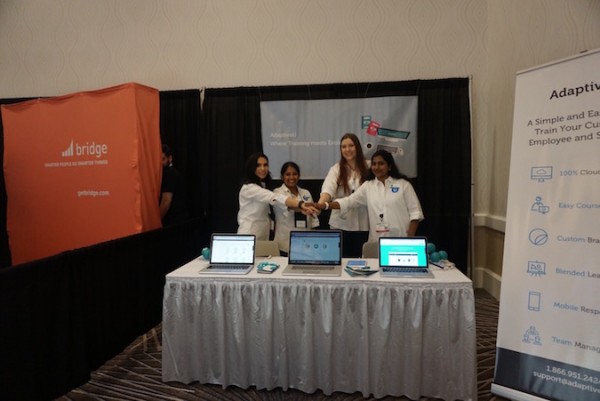 Being the first time FULL Creative had attended the conference, Ciara says, our team didn’t know what to expect, or what it would look like. “We prepared as much as possible,” she says.

When they arrived and set up their table to introduce the world to AdaptiveU, our team noticed right away that some more established companies had gone all-out on their booths—one even brought along a KISS impersonator. 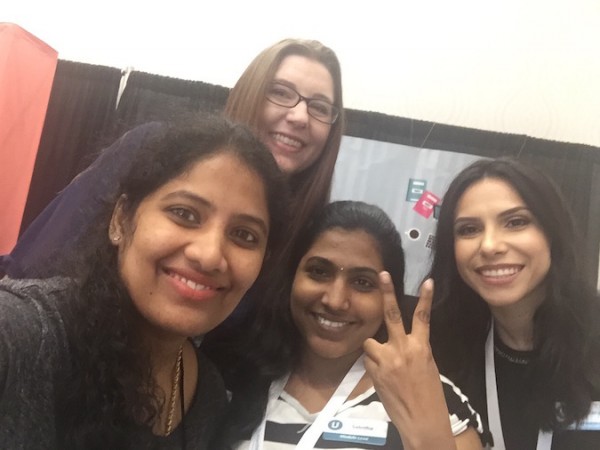 Our team of scrappy underdogs resolved to make up for their lack of glitz (and platform boots) with good old-fashioned smiles and human connections. “The people across from us had an awesome booth,” Ciara says. “But just by talking, we were getting a lot of volume to our booth,” she says.

Having Saranya there, Lucy says, was FULL Creative’s trump card. “Other booths didn’t have the actual developer there. If you had questions, you could ask and hope. We didn’t have to hope. Saranya was there and she was definitely capable of answering anyone’s questions,” she says. 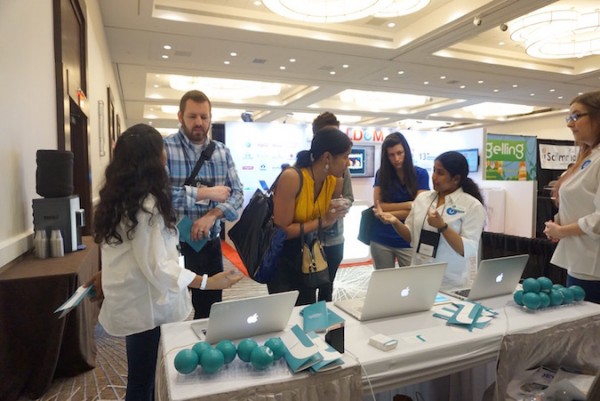 Saranya, Ciara, and Lucy prepared and delivered a presentation on AdaptiveU to Learning Solutions 2016 attendees. Here’s the video of the presentation.

For Saranya, who has led the effort to build AdaptiveU and bring it to market, Learning Solutions 2016 was a great opportunity to connect with the industry and potential customers. “I’ve been following the eLearning industry for a while,” she says, “but at LSCon I was seeing it in real life.” She was able to see what industry leaders, who have been around much longer than AdaptiveU, are doing.

“One good thing that differentiated us was the simplicity of the system,” Saranya says. “Ours is simple—easy to create, easy to understand.” She was pleased to notice that several features in the bigger companies’ products are already in her team’s backlog to build next.

The Future of the AdaptiveU LMS

Over the coming year, Saranya says, she plans to focus on two main improvements for AdaptiveU. The first is something called the Sharable Content Object Reference Model. This would allow administrators to import content from another LMS into AdaptiveU. Obviously, that kind of feature is important for bringing new users to the system.

A second focus, Saranya says, will involve an Experience API or Tin Can API. This would help users incorporate learning done outside an LMS—such as reading a book—to be tracked within the system as well. “Learning is not done when you leave your office or your system,” she says. “It can happen anywhere. Not many people have this.”

Having traveled far to reach Orlando for Learning Solutions 2016, our team didn’t miss out on the chance to see the sights and have some fun, too.

They stopped by a Hindu temple, where Saranya and Sabitha were able to introduce Ciara and Lucy to some aspects of Indian culture. “I learned I had to take my shoes off and wash my feet,” Lucy says. “They were explaining how to pray to each of their gods. I was like a little kid asking why the sky is blue.” 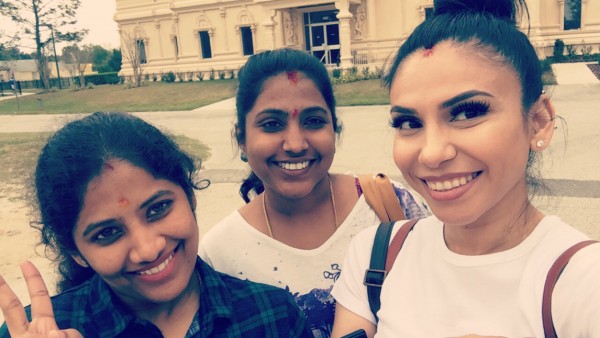 Naturally, no trip to Orlando is complete without a stop at Walt Disney World. They went on some rides and had fun, even though it rained while they were at the theme park. Overall, Lucy says, “I’m twenty years too late for Disney World.” The real thrill for her, she says, was the first day of the Learning Solutions convention. “I enjoyed telling everyone about Saranya’s work,” she says. 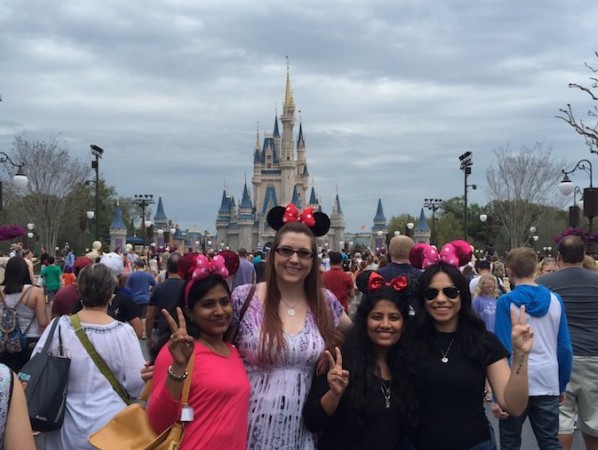 For AdaptiveU’s lead developer herself, the entire trip—to Orlando and to the USA in general—was more than she expected. “I did not think people would be this friendly to us,” Saranya says. “I thought I’m going to just go there and work, and come back. I didn’t think it would be this fun. I was able to meet great people and make friends.”